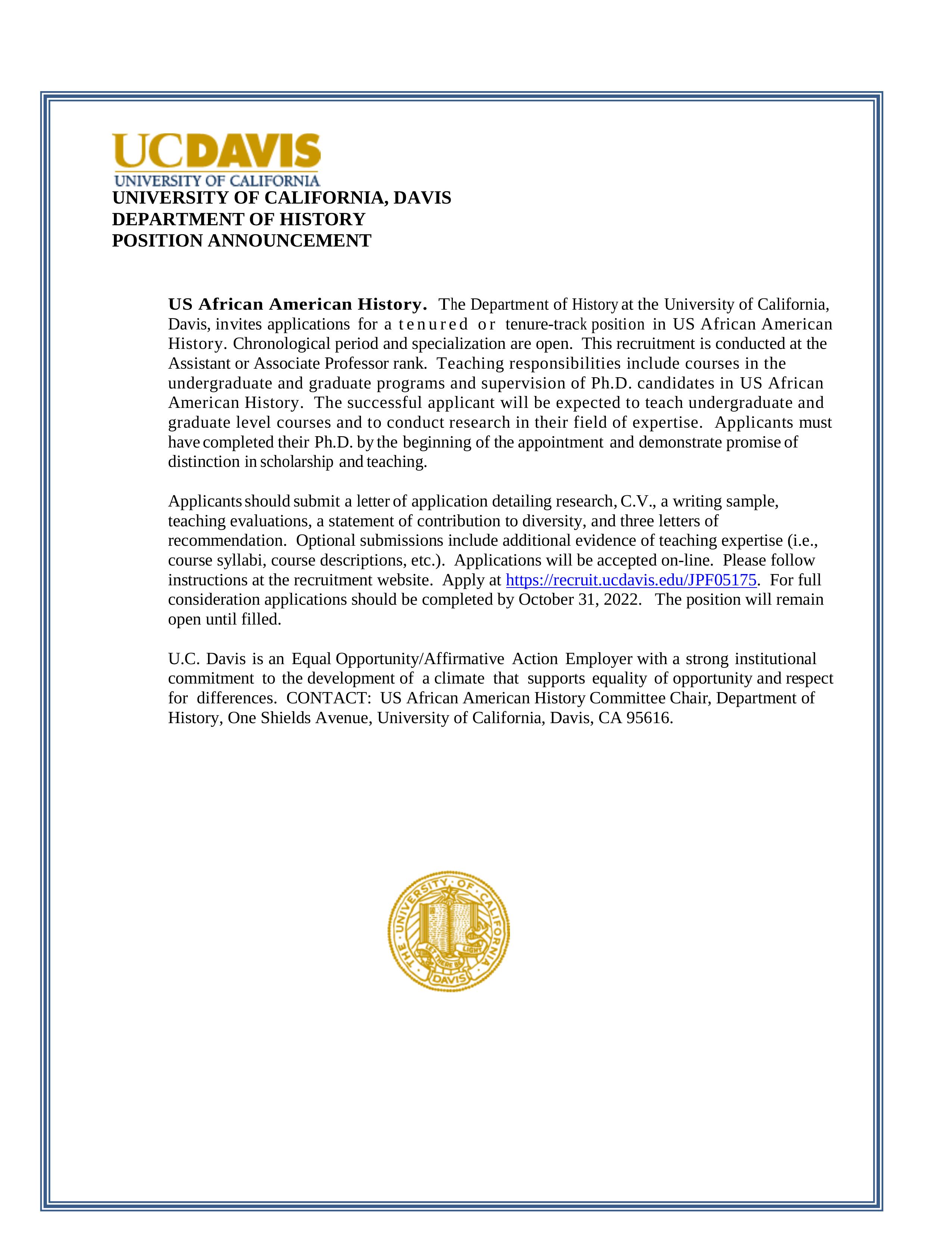 UC Davis historians have made the stories of the roles women played in shaping the landscape accessible to historians, park employees, resource centers and the general public for sites in the Pacific and Western United States, where the national parks began. National Parks frequently tell the history of explorers, labor leaders or even some of the Native people whose homelands are part of park regions.

Daniel Castaneda accepted into Professors for the Future Program

Graduate student Daniel Castaneda has been accepted into the university's highly competitive Professors for the Future program!

Daniel will spend the next academic year engaged in workshops and professional development. Congratulations Daniel!

Graduate student Charles Sills has received a prestigious Critical Language Fellowship to support his study of Arabic this summer in Tangier, Morocco.

Congratulations to Professor Howard Chiang, whose book, Transtopia in the Sinophone Pacific, is shortlisted for the 2022 Lammy Award in LGBTQ Studies by the Lambda Literary Foundation!

See all the finalists here.

DHI Conversation with the Department of History: Russia and Ukraine

Over 500 people attended the zoom event in which Jo Andrews, David Biale, Ian Campbell, Anya Free, and Jenny Kaminer discussed the historical background of the current tensions between Russia and Ukraine, their contemporary contexts, and geopolitical implications going forward.

Watch the recording of the event here.

Professor Greg Downs writes about how the city can engage constructively and democratically with the country's history in their attempt at renaming schools.

Check out the article here!

The Association of American Publishers awarded Professor Charles Walker and Liz Clarke the Nonfiction Graphic Novels award for their work, "Witness to the Age of Revolution: The Odyssey of Juan Bautista Tupac Amaru."

Teresa Spezio, a Ph.D. graduate in history from UC Davis in 2011, was recently featured in the Los Angeles Times to discuss the current oil spill at Huntington Beach.

Professor Greg Downs and dozens of other historians from around the country recently traveled to Gettysburg, Pennsylvania, on the 158th anniversary of Lincoln's issuing the preliminary Emancipation Proclamation. The historians sought to highlight distortions of Black contributions in the battle over the Civil War's legacy.

Professor Olmsted writes about the upcoming California recall election and the history of the recall process in California.

Check out the column by Robin Washington, who sat down with Professor Downs to discuss some of the enduring myths surrounding Juneteenth.

Professor Chiang served as editor-in-chief for the Global Encyclopedia of Lesbian, Gay, Bisexual, and Transfer, and Queer (LBGTQ) History. This three-volume encyclopedia won the 2020 Dartmouth Medal and features contributors from nearly 40 different countries.